Posted on October 15, 2010 by Jennifer Hamblett

We have all heard the jokes and received the embarrassing gifts.  We can work out that ‘mother in law’ is an anagram of ‘Hitler woman’- try it, it’s true.  And we can even look back far into poetic history to confirm our problems; “Give up all hope of peace so long as your mother-in-law is alive,” wrote Juvenal in Satire VI in 115 CE.

But are these jokes and stereotypes correct? Are mother in laws really today’s familial pests? 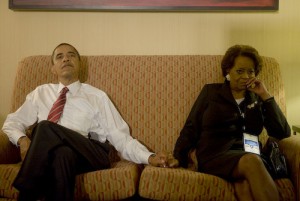 Barack Obama may disagree.  In 2009, shortly after becoming president of the United States, he moved his mother-in-law into the White House with no evident headaches.

Dr Terri Apter, a psychologist at Cambridge University, said of her recent study into in-law relationships, “At least 10% of people in my study contacted me because they wanted to tell the good news about their in-laws.”  Apter’s study showed that only 15% of men complained that their mother-in-laws gave them headaches. Whereas 60% of women felt that the relationship with their mother-in-law caused them long-term stress.

Dr Christine E Rittenour, a professor of communications at West Virgina University, says “to me its seems much like the ‘wicked stepmother’ phenomenon that has plagued step-families and step-mothers.”

Perhaps then it is a cultural problem?

In 2006 Italy confirmed the stereotype with an alarming divorce rate. A poll showed that three out of ten marriages failed because of the unusually close attachment of Italian men to their mothers.  Whereas Sikh women admire the actions of Mata Tripta Ji, Guru Nanak’s mother, who treated her daughter-in-law as a daughter and helped with raising her children.

So how important are mother-in-laws to our families?  What are their roles? Are they destined to always be familial pests?

If you have a mother-in-law who you love, hate or just survive, I would appreciate your comments in the survey below.  It will only take 5 minutes and could help vent that angst or emphasize your bond.

This entry was posted in Survey and tagged family, mother in law, relationships. Bookmark the permalink.