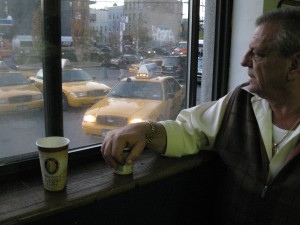 Thousands of times every day and night, they’re waved at, pulled over, slid into, paid for and slammed shut.

Though native New Yorkers tend to take the city’s ubiquitous yellow taxis for granted, they’re as quintessentially NYC as the Statue of Liberty and folded pizza.  But beginning in a few years, the city’s famous cabs will look drastically different.

The city’s Taxi and Limousine Commissioner, Davis Yassky, and Mayor Michael Bloomberg announced this Monday the three finalists in the competition to become the “Taxi of Tomorrow,” which the TLC website describes as “the first-ever custom-built taxicab specifically designed for New York City.”  The winning design will become New York’s exclusive taxi model for at least 10 years, beginning in the fall of 2014.

In the meantime, thousands of drivers, fleet owners, mechanics and inspectors will continue to earn their living working with the city’s 13,237 licensed taxis of today.

View the slideshow to see some of today’s cabs and the people who drive, rent and repair them at McGuinness Management Corporation, at 330 McGuinness Blvd. in Greenpoint, Brooklyn.

This entry was posted in Photo Slideshows and tagged New York City, Taxi of Tomorrow, taxis. Bookmark the permalink.

1 Response to NYC’s Taxis of Today