Ah, a new school year.  Time to polish those apples, sharpen your Number Twos, and get to learning…no wait, we mean filling in endless rows of multiple-choice bubbles. 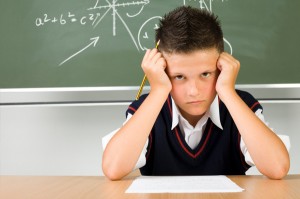 Many people had assumed that with the passing of the George W. Bush, No Child Left Behind era—in which annual exams were first mandated for students in grades three to eight—that the relentless focus on test scores would come to an end too.

Right, and maybe this year recess will be an elective.

Nope, the Obama Administration, led on the education front by Ed Secretary Arne Duncan, has actually intensified the emphasis on testing in its drive to develop a “culture of accountability.”

Indeed, to get a slice of that sweet Race to The Top pie, states had to promise to “close the data gap” by assessing students more often and using that test data to determine which teachers are actually teaching—and which need to take a permanent vacation.

And as most New Yorkers know all too well, Mayor Bloomberg and public schools chancellor Joel Klein are fond of testing too.

So the question is: how useful are these things?

Critics, meanwhile, charge that the exams assess a narrow set of skills, hog precious learning time, and are unreliable indicators of teacher effectiveness.

Today, we want to hear from you.

Are standardized tests, so pervasive in our city’s schools, a pernicious breed of New York pest?  Or are they like thermometers, painful when rammed down your throat, but vital for testing your health—or in this case, the health of the NYC public school system?

Let us know what you think about standardized tests in the comments below.

We promise, this time, you’re not being graded.

This entry was posted in Ask a Question and tagged education, pests, testing. Bookmark the permalink.