What do you think about glue traps?

Last week I confessed to taking a certain amount of satisfaction in killing house pests.

In effort of that blog post, I spoke to a neighbor who reported the displeasure he takes in disposing of mice with glue traps. I thought that fair enough—I’ve occasionally used them myself, and know well that watching a mouse struggle, than submit to the adhesive pad can be a gruesome sight indeed.

But I had no idea the things were causing an international uproar!

Not surprisingly, PETA is on the case, orchestrating a letter-writing campaign to remove glue traps from the shelves of major retailers and spare rodents “an enormous amount of suffering and traumatic death.” 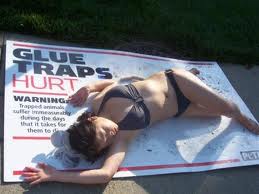 (Ever helpful, PETA also recommends a small quantity of cooking or baby oil to set a rodent free.)

Meanwhile, in what strikes me as an odd bit of news, some municipalities in Australia have banned glue traps over the protests of Aussie pest managers, who say the ban puts rodents over people.

I’m already on the record on this one. I’ve used glue traps before and I’ll use them again, but I do think it’s reasonable to draw the line somewhere on animal cruelty, even when it comes to house pests.

Fellow New Yorkers, what do you think? Are glue traps morally reprehensible? Do you come down on the side of humane extermination? Maybe catch and release? Or do the ends justify the means in the war on pests?

This entry was posted in Ask a Question and tagged Australia, glue traps, pest management, PETA. Bookmark the permalink.

2 Responses to What do you think about glue traps?