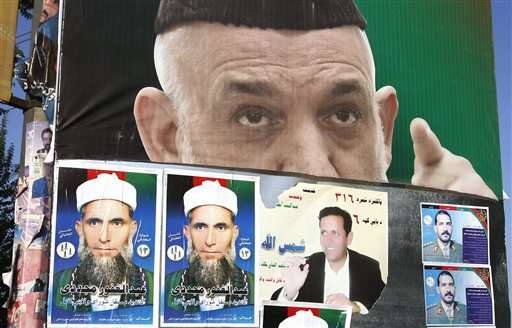 Posters of provincial candidates are seen pasted on a torn poster of President Hamid Karzai, who is also a presidential candidate in Kabul, Afghanistan, Sunday, Aug. 9, 2009. Afghan President Hamid Karzai was long seen as the inevitable winner, but Abdullah Abdullah, a former foreign minister, has emerged as Karzai’s top challenger and appears to have closed at least part of the gap with a campaign focusing on government mismanagement, corruption and rising violence. (Musadeq Sadeq)