A few weeks ago, I asked readers if they have witnessed and/or participated in public displays of affection (PDA) and what their thoughts are on the issue. Well, the survey results are finally in! 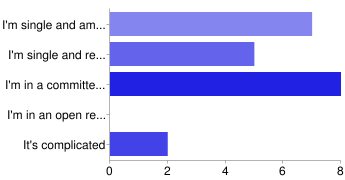 Most survey respondents are in a committed relationship or are single and looking for love.

Apparently I’m not the only one who has seen PDA, as all of the survey participants have witnessed PDA, too. 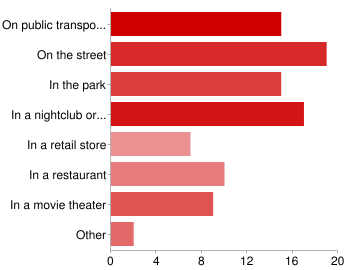 Most respondents reported that they see PDA on the street and in bars/clubs. On public transportation and in the park came in 3rd. Teenagers and young adults are reportedly the most common PDA offenders. Only two people reported that they have seen middle-aged people engaging in PDA.

Surprisingly respondents were scattered along the scale of how badly PDA bothers them. No one reported ambivelance and no one reported that they completely hated it either.

Most participants reported that they feel PDA is harmless, while just one person said they loved PDA and another said it's "like a terrorist attack."

More than 2/3 of survey participants have engaged in PDA.

Take a look at the results gathered here. To check out the other pie charts and bar graphs which break down the date, click here.

Thank you to everyone who participated in this survey!