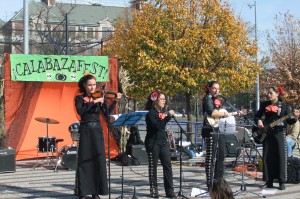 Mariachi music originated in Mexico, consists of string, brass and wind instruments and is a genre typically dominated by men.  But rules are meant to be broken.  Enter Mariachi Flor de Toloache, New York City’s only all female mariachi group.

Named after a flower native to Mexico, the band consists of a rotating number of female musicians from all over the world.  I had an opportunity to talk with one of the bands singers, Shae Fiol, about how people react to the band, the vihuela she was playing (a high-pitched, five-string guitar) and how some of the men in the mariachi scene treat her and her band mates.

Talking about female mariachis and how rare they are.
mariachi interview pt 1_1-2

Explaining the vivuela, a five-string guitar, typical to the mariachi sound.

Shae Fiol talking about the challenges of being a woman in a male dominated mariachi scene.
mariachi interview pt 3_1-2

This entry was posted in Audio, Uncategorized and tagged mariachi, mexico. music, women. Bookmark the permalink.