Crowded NYC Subway Not an Excuse for Groping

I didn’t know what a ‘subway groper’ was until last week. I have to admit my ignorance because I found out the answer the hard way.  On Tuesday Oct. 5th, I was late for class. I took the local Manhattan bounding M Train at 8:30 a.m. At Queens Plaza, the E Train arrived, crowded as hell, but I decided to get on board. I found myself surrounded by two plain-cloth police officers in front of me – badges visible – an Black woman at my left, an Asian woman at my right and a man behind me (I couldn’t see his face for race identification purposes).

Long story short, the officers stopped the train on the 23rd Ely Avenue station and arrested the man behind me for “rubbing his body on the Asian woman” at my right side. When did that happen? I don’t really know. A guy in the train said: “There it goes another ‘subway groper.’” For me it was, “there goes another pest of New York.” 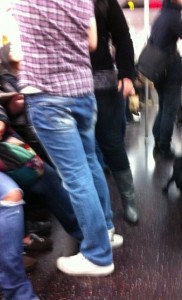 Subway gropers are a pest too.

Sexual harassment in the NYC subway is the number one quality of life issue in the city’s transportation system and, unfortunately, one of the hardest ones to get accurate statistics on.  Last November, the NYPD publicly reported for the first time on a press conference that 587 sex offenses were recorded in 2009.  However, they believed that was only a fraction of the actual number of cases that took place.

On April of this year, the number of arrests related to sex offenses was already 412.  The situation becomes worse when one starts considering the increased number of understaffed train stations due to recent MTA layoffs.

Here is what the public knows about these crimes:

Have you been the victim of sexual harassment on the subway?  Have you been witness to an offense? Do you have any tips on how to handle these situations?

Please share your insights with me by filling out the following short survey.