There are plenty of positives for commuting into Manhattan for work or school. It saves money,  time and more often than not, a lot of stress. 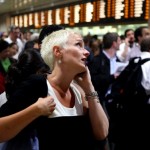 But it’s days like today that make those commutes awful.

I was one of those lucky enough to just catch one of the last trains heading east out of Penn Station before the MTA suspended all service to Jamaica, but even then, delays still plagued the train.

“Are we sitting here again?” said Rebecca, a secretary for a law firm in Manhattan, who recalled getting stuck in Penn Station just a few weeks ago as a result of a fire at Jamaica station. “It’s just frustrating never getting home on time.”

Most other passengers groaned alongside her with each additional announcement by the LIRR staff, telling everyone to remain patient as the trains were held up.

Even those who try to use their time effectively on the train were annoyed. “It’s never nice to sit here in a crowded, stuffy train,” said David, a financial worker in downtown Manhattan. “The amount we pay for this makes it even worse.”

But it’s hard to complain when you’re lucky enough to at least be on the way home, as opposed to those stuck in Penn Station with just their hopes of getting home prior to midnight.

Other services are getting delayed too, like the 7 subway train, and most bus service throughout the city.

Have you ever been stuck in Penn Station, at a bus stop or standing in a subway station waiting for your ticket out of the city?

This entry was posted in Ask a Question and tagged Commuting, Delays, LIRR, MTA, Penn Station, Train. Bookmark the permalink.