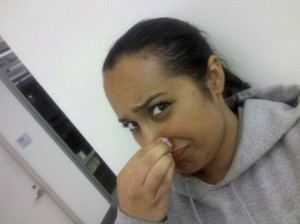 I *heart* NY…I really do.  But, despite being an amazing place, this city is plagued with crowds, crime, and most of all, dirt.  And with all of the people and filth, things can get pretty smelly.

In early 2009 the “Great Maple Syrup Mystery” smell was blamed on nearby fragrance and food additive factories in New Jersey.  The issue was such a big deal that Mayor Michael Bloomberg held a press conference to address the matter.  According to Reuters:

“The odor has attracted media attention and hundreds of complaints from city residents.  The city had assured residents that the odor was not harmful, but it was not able to explain its source until now.  The mystery was solved after city agencies matched complaints by their geographic location against information about winds and atmospheric conditions.”

The source of the smell had been a mystery since 2005.

During the hot summer of 2009, the New York Times published Op-Art piece, “Scents and the City” that details writer/artist Jason Logan‘s experience “navigate[ing] the city by nose.”  So, clearly I’m not alone in wondering what’s up with all the funky smells!  Check the odor map out here to see if you have gotten a whiff of the same smells.

For this week’s Pests of New York, I would like to know:

What do you think is NYC’s worst smell?  Where do you smell it?

1 Response to Eww! What’s that smell?