The price of going out: NYC’s biggest pest 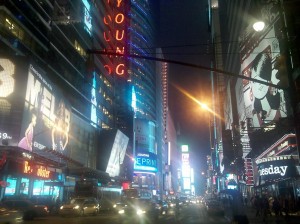 A view of Times Square at night (Photo by Amy Stretten)

You can ignore the slow-moving tourists, get over the crowded streets and humid subway, and deal with beggars and never-ending construction.  But, what’s one of the most difficult things about living in the city…one of the biggest pests of all?  The cost of living!

New York is known as the “city that never sleeps.”  So, what is everyone doing if they’re not sleeping?  Exploring the nightlife!  Whether watching a movie at the theater, dining out, sipping cocktails at a bar or checking out the city’s hottest nightclub, one thing is certain…enjoying NYC at night is expensive!

This year marks the 10th annual Zagat NYC Nightlife Survey, which “covers 1,014 nightspots rated and reviewed by 5,719 local night owls.”  Average prices for a night out in NYC are as follows:

5. Cab ride home after a night out: varies by distance, but from Midtown to the UWS: $15

While ballin’ on a budget in NYC may seem impossible, there are nightclubs and parties in each of the five boroughs that do not charge a cover.  Here is a list of six websites that can help you find something to do this weekend without breaking your budget!